Not just about the stars 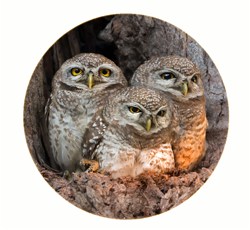 Many have not heard of light-pollution.  Those who have typically think it is only about seeing the stars.  But, light-pollution is one more way humanity is altering the natural environment on a global scale with significant multifaceted environmental consequences.
Definitionally light-pollution is wasted energy, in the form of misdirected light, and hence a needless contributor to carbon emissions and other air and water pollutants associated with energy production.  Little Rock's streetlights alone generate some two million pounds of carbon a month, much of it for light carelessly thrown into the sky or nearby homes.
But it is worse than waste. The continuing spread of careless outdoor-lighting is altering the diurnal cycle of night and day in our cities, towns and even countryside, with implications for human health and other living things exposed to it.
The natural cycle of light and darkness cues critical hormonal responses in humans, animals, and plants.  The American Medical Association has issued two public health statements implicating exposure to light at night in sleep problems, diabetes, obesity, depression, as well as breast and prostate cancer, all epidemics of modernity(1).  Even a brief exposure to low levels of blue light at night is sufficient to impact these hormonal processes(2).  Impacts to migrating birds, fireflies, and frogs down to plankton are being documented(3).  Turning night into day is not a trivial matter.  Wonderfully efficient LED fixtures, with high blue content, threaten to compound the health and habitat concerns if not used with care.
But there is more.  Poor lighting practices have other esthetic, security and safety impacts.  Lamps have shades for a reason.  Unshielded lighting - any fixture that exposes the light source directly to the eye – can cause discomfort and/or reduce the ability of the eye to see into less well-lit adjoining areas – “disability glare”.  Poor practices also create shadows and uneven illumination, while over-lighting is as bad blinding the observer beyond the immediate over illuminated area.  All of these can have adverse safety and security implication worse than if the offending fixture was not there in the first place and are more pronounced in the older population.
Not being nocturnal animals, it is in our nature to view darkness as evil.  Crime being evil, surely light makes us all safer. But there is no greater source of wasted light than "security lighting."  Not only is it typically poorly designed, but in many applications useless, if not counterproductive.  Criminals are not cockroaches.  There is no credible empirical evidence that light is an antiseptic for crime.  Lighting can enhance security only when friendly eyes are likely about, or when placed on a motion sensor(4).  In fact, lighting an unmonitored area is as likely to facilitate Crime as prevent it(5).  Cities turning streetlights out late at night, to save money and carbon, often find crime falls.  In a controlled study crime increased in newly illuminated Chicago alleys but not alleys left unlit, while vandalism all but vanishes when school districts turn out lights on vacant campuses(6).
Uniformed impulse, commercial lighting wars for visual attention, and careless application have led us to needlessly poison the night with useless artificial light.  There is hardly a naturally dark sky east of the Mississippi river and they are rapidly shrinking in the west.  Eight out of ten young adults have never seen the galaxy they live in, and a whole new type of tourism has sprung up with people traveling to Dark Sky Places to see the universe over their heads veiled by wasted light carelessly poured into the sky where they live.
Responsible empirically based lighting practices are available from the Illumination Engineering Society.  Responsible corporations, like Apple, offer features on their screened devices to remove unhealthy spectrums of light at night.  The Federal Highway Administration is reviewing it lighting recommendations for public highways in light of the emerging health and environmental impacts(7). Park services are responding to the risks to habitat by lighting responsibly, as are some Cities which are also passing lighting ordinances to enforce responsible, neighbor friendly, lighting practices making for more beautiful, healthier, safer, efficient and environmentally responsible cityscapes.
Here are references to reports that you might find useful:

Donate to our Chapter

Donate to our Chapter

The mission of IDA Missouri is to raise awareness about light pollution issues in Missouri, promote quality outdoor lighting, protect our natural environment and our beautiful night sky, and educate the public how reducing light pollution can lower energy costs.